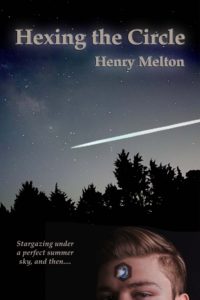 Stargazing one summer night, college student Dale Walker was in the right place to recover an intriguing meteoric fragment, a thin hexagonal crystal. However, when he put it on his forehead, like a cosplay ornament, it wouldn’t come off!  And that was just the beginning of the changes that mistake brought to his life. When he regained consciousness, his memory and perceptions were enhanced, but his wasn’t a comic book life. There were no evil villains or saving the world. Instead, how was he going to go to his job interview with a bandage plastered over his forehead to hide his own stupidity? Plus, with his enhancements the veils were off and he could see the flaws in everything from online games to movies, and the secrets his friends hid were showing through.