Posted on January 19, 2015 by hmelton Posted in Books, Stories 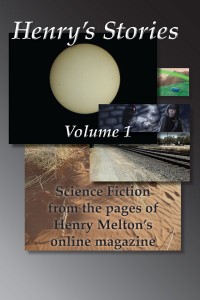 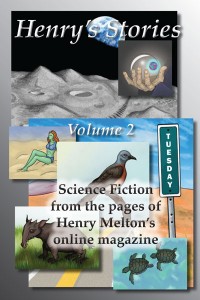 This is really two books, Volumes 1 and 2, but I’d be saying the same thing twice, so I won’t waste your time.  Over the past decades, I’ve written many shorter pieces of fiction. Several have appeared in magazines and paperback anthologies.  A few years ago, I set up a web page, like a blog, where I’d serialize my fiction, posting about a chapter’s worth every MWF.  The idea was to reach those people who never read books, and yet spend hours each day reading on the web. I kept Henry’s Stories going for two years, pushing out reprinted stories, serialized novels, and new fiction, hoping to grow an audience.  That never materialized.  Gathering an online audience is harder than it looks.

Instead, I took those same stories I’d been giving out for free on the web and assembled them into books.  Those sell just fine.  Who knew?

Since this is a wide-ranging collection of stories, some of them are difficult to describe.  I had to put Catacomb in Volume 1 since it had triggered more fan mail than everything else, but I also tried provide a mix.  Volume 2 has a few stories that I consider some of my best.  However, people tend to buy just the Volume 1 when they’re unsure of what they’re going to get, so its sales are much higher than Volume 2.

Maybe someday I’ll do a Volume 3, but that will depend on whether I have time or not.  I tend to write some short fiction just for fun, never intending them for publication.  Some are experiments, and to be truthful, a lot of experiments fail.

But if you’re a novel-only kind of person, you’ll miss out if you never sample these.  Remember, they are still out there on my website for free.

So, these permanent homes for my shorter works where new people can discover them are my favorites.