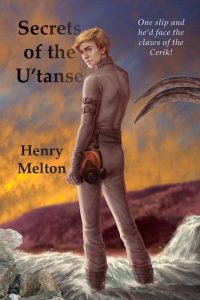 Joshua was born a Free U’tanse, one of the few humans not under the claws of the Cerik who ruled the poisonous planet Ko. But after the secret rescue of the abandoned people of Rikna, it became his job to keep the existence of the refugees quiet—putting him at odds with people who couldn’t realize that a single stray thought was deadly on a world where telepaths were everywhere.

Henry Melton’s generation-spanning Project Saga examines humanity’s destiny, both in the Earth Branch where a nearby supernova destroyed our civilization and we were forced to rebuild with powerful new technology, and in the U’tanse Branch where a psychically-gifted splinter of humanity, taken away as slaves, make their way on a world that can never be their own.