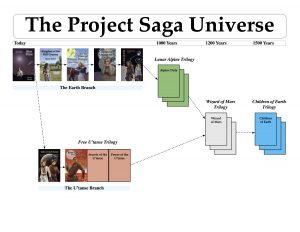 I have, over the years, outlined the whole story that takes place in the Project Saga Universe.  Today, I thought it was about time I made up a chart, showing where everything went.  Full-res PDF version At this point in time, seven of the eighteen books are published.  Two of them are completely written, but not published.  Two more have detailed outlines, which means that they will be written fairly quickly.

Unfortunately, that means I’m really only half-way to the finish line.  Being of the gray-haired persuasion, I do worry about my available time, so I have a backup plan that consists of reducing the Wizard of Mars trilogy and the Children of Earth trilogy to a single book each, which would reduce the book count down to fourteen, but that would leave out so much!

For those people who hate to buy a partial series, this chart also shows how the books are related.  The Earth Branch is completed.  It consists of five books that can easily be read independent of the others, but is richer when read as a group.

The U’tanse Branch actually consists of Tales of the U’tanse which contains a set of novellas that tell of the beginning of the U’tanse culture plus the Free U’tanse trilogy that is more tightly connected.

Coming up as soon as the U’tanse Branch is completed is the Lunar Alpine trilogy, taking place with the same main character on terraformed Luna long after the events of Humanicide.  The first book is written, the other two have been outlined.

The grand reunification of humanity takes place in the Wizard of Mars trilogy.  I may change the title of the trilogy, but that’s the name of the first book of the three.

Reunited, the Children of Earth round out the final trilogy, where humans and their children take their place in the larger galactic civilization.

I greatly hope everything plays out according to plan, because this is a story I’ve been telling for decades and I would love for the rest of you to have the chance to share it.