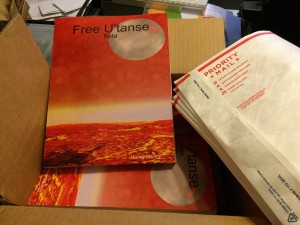 Every new novel, after a few rounds of editing, gets packaged into an 8.5 x11 bound format and mailed off to select readers who then have the joyous task of scribbling all over it and telling me where I messed up.  Well, yesterday the shipment of Free U’tanse beta copies arrived and it’s time for me to package them up into mailers and get them sent off.  BTW, that’s not the real cover.  It’s just a dummy until I get the final artwork in from Djamila in Germany.  It’s always a race to see which reaches the deadline first, the manuscript or the artwork.  Some of these Beta copies have nearly the final artwork, others just have a few scribbles.