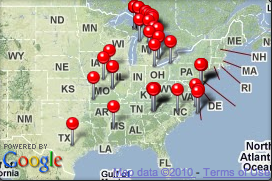 Attending the Archon science fiction convention in St. Louis every year has frequently become the starting point for an extended road trip and this year was no different.  Mary Ann was in need of some more fall foliage photos and I had a few places I needed to visit to promote my books, but other than that, we started off with no fixed itinerary.  We also stopped to visit a few friends along the way–mostly Mary Ann’s friends because she’s the social one.

Archon was primarily to meet people and speak on panels, since I was too late to get a table in the dealers room to sell my books.  It’s always fun to attend, particularly because of the hall costumes.  I put on my best friendly-author face, met people, and had fun.

My next point of interest was visiting the area around Oquawka, Illinois, where the Golden Girl time travel novel was set.  I handed out copies to the local libraries and visited the indie bookstore Burlington By The Book, in nearby Burlington, Iowa.

Mary Ann was, of course, taking photos, and she has been well ahead of me blogging about this trip, so be sure to pop over to her blog site to see some of her pictures.

Two stories in the very early stages have significant scenes in the Detroit area, but since I’d never actually been there, I wanted to visit, and in particular, see the St. Clair/Detroit River waterway that connects Lake Huron with Lake Eire. But since we hadn’t scouted out the Lake Huron coast either, why not head that way, and since we were in the neighborhood, why not visit the Michigan Upper Peninsula again and revisit our favorite spots, like the Seney National Wildlife Refuge and Munising, where Lighter Than Air was set.  We felt guilty but giddy for fitting in that brief visit.  The Lake Huron coast and the Detroit area were just what I needed to see to fill some plot holes in the new/unnamed works.  We even got to hop over to the Canadian side so Mary Ann could get a good sunset photo of the Detroit skyline from Windsor.

By this time in our trip, I was more concerned with writing down the new plot details and turned the navigation details over to Mary Ann.  She had more places to visit and we headed towards the Atlantic coast, with Cape May, New Jersey as her target spot.  I believe she was well pleased.  We spent several days there while she put in some heavy birding, and I began the process of reading out loud the unpublished novel Bearing Northeast as an editing exercise.  The novel will likely be out this spring.

After leaving Cape May via ferry, we headed south down the coastline, visiting the Outer Banks for the first time.  Birds and lighthouses were her prime focus, but eventually, the approaching deadline to be home was making its presence felt, and we set our bearing towards the Great Smokey Mountains National Park, where she was confident she could get some good fall foliage shots.  From previous trips, we headed for Cherokee, North Carolina, since that was on the quiet side of the park and we knew there were motels right next to the park entrance–essential for her plans to get up before dawn every day and get up in the mountains for sunrise photos.

Arriving at Cherokee was a bit of a shock.  Since our last visit, a casino and a great deal of hotel construction had changed the appearance of the town.  The tribe appeared to be making every effort to pull a lot of that tourist money away from Gatlinburg, Tennessee on the other side of the mountain.  Still, the old motels were still there and we got our spot.

Once Mary Ann had gathered a few hundred GB of high quality photos of mountains, trees, and water falls, it was time to head home.  We passed through Georgia, Alabama and Mississippi too quickly, remembering many previous trips where we took our favorite route along the Natchez Trace Parkway instead of the interstate.  But she had a class to teach on Tuesday, so as I drove, she was building a slide presentation on her laptop, with just a few token visits to wildlife refuges along the way so the days weren’t entirely just highway miles.

Monday, we arrived after dark, with 6719.5 miles on the trip meter.  It was hardly a record, but it was enough for Mary Ann to get her photos and hone her birding skills, and for me to recharge my writing batteries with new ideas.  However, I wouldn’t be averse to heading out again, any time now.

Kingdom of the Hill Country