↓ Skip to Main Content
Home › Stories › The World of Ko

The World of Ko

Posted on October 7, 2014 by hmelton Posted in Stories 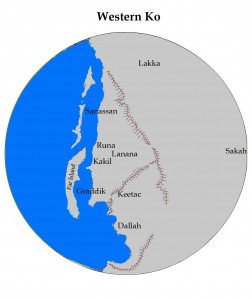 The next book is currently a new novel of the fragment of the human race, the U’tanse, who have been taken off world and made into slaves for the Cerik.  Their home world is Ko, a planet with a large moon.  With constant quakes and lava flows, the air is contaminated and poisonous to the U’tanse.  The first book set on Ko, Tales of the U’tanse, set the stage for the development of U’tanse culture, but as the population of both the Cerik and the U’tanse increase, the early agreements between master and slave start to fracture.

I’m currently working on the first draft of Free U’tanse and one thing is clear, the world of Ko needs more detail.  Political stresses between the clans of the Cerik are influenced by the available pasture lands for their prey animals, for one thing.  I’d love to take time off and spend more time world building, but it’s an iterative process and the demands of the story have to take precedence.

Still, world building is fun, even if I have to take it in steps.