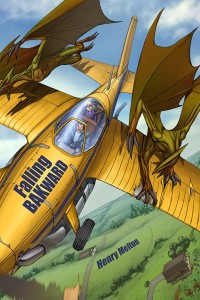 Jerry Ingram never wanted to be an interstellar explorer, just a bit more special than a sixth-generation farmer in South Dakota, and that’s why he spent hours after school digging at the mystery spot in the back fields, searching for Indian artifacts. But those bones he found didn’t even look human.

His family were ordinary folks, just struggling to make sunflower seed farming pay, but with maybe a few secrets his father never discussed. Why did Sheriff Musgrave always pick on them, and how did dad lose the fingers of his right hand? It would be great to be more like lucky Uncle Ted and his rich cousins down the road.

But when a cave-in forced Jerry deep into the derelict flying saucer buried there since the last ice age and through a portal to the world of the Bak, both branches of the family came together to hunt for him and reveal just why the Ingrams of Chamberlain S.D. were the perfect people to make first contact with the Bak and why the zebra-striped gentle giants on the alien world had been waiting thousands of years for them.