Centuries after the Plague, detailed in Humanicide, humanity lives on… Charles Fasail was born to be a student on the island nation of Alp, a colony of scholars on an illiterate world—the terraformed Luna. For seven years he survived as an indentured dockworker after his home was destroyed in a cataclysmic firestorm. Earning his way out of servitude and joining a wagon train into the interior lands to find a place of his own should have been his bright, new beginning. All that was lost to an attack by the forest dwelling Kimmer and the betrayal by his older brother. It left him on a solitary path, struggling to be the Alpine scholar he was born to be. He had to wander a fascinating world similar to Far Earth in the sky above, but shaped by the lighter gravity, the 48-hour days, and the oxygen-rich atmosphere created by its transformation. All he had was his early training and, hidden in his backpack, his father’s impulse gun, a relic from the ancient days of lost technology. Alpine Duty is the first book of the Lunar Alpine trilogy. Henry Melton has been crafting the Project history line since the 70s, building an alternate history of mankind that stretches from the current day to a new destiny among the stars. 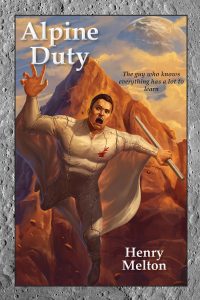