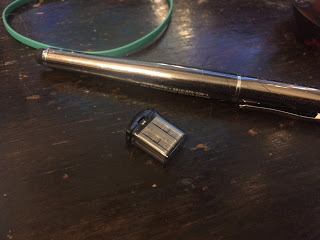 But lately, I’ve been feeling the need for something a little different.  They make USB
‘thumb’ drives so small these days that I picked up a fast USB 3 128GB drive SanDisk Ultra Fit 128GB USB 3.0 Flash Drive (SDCZ43-128G-G46) [Older Version]

for about $30 on Amazon.  Since I already had Carbon Copy Cloner running multiple backups, it wasn’t hard to add another.

The idea for this backup was to have nearly all my personal files on me at all times. If I’m on the road, lose my laptop, and don’t even have internet, I could borrow someone else’s mac, and get access to whatever I needed in case of emergency.

Now 128GB isn’t enough for my music, photos, or videos, so that’ll have to wait for another generation of pocket drives, but with some careful exclusions (no cache files, downloads, etc.), I was able to select my whole user account on my Mac. To insure that my Pages and Numbers files are also included, since some are on iCloud, I made two little sparsebundle backups of them as well that would in turn be backed up to PocketBackup drive.  I used sparse bundle drive format since it’s most efficient in doing incremental backups, since only the changed bands would be copied.

The other restriction I had in mind was to make the whole copy encrypted.  This way, I can carry the thing in my jeans pocket every day with no worries about losing it.  I’d just have to buy another drive and look at this blog post to remember how I did it the first time.

Here’s the setup:  I formatted the drive and created an encrypted sparsebundle disk image on it.  In addition, I have an unencrypted README file with my contact information in case it’s lost and a nice person finds it.

Carbon Copy Cloner waits for it to be inserted.  Then it mounts the encrypted disk image, makes the daily changes, and then dismounts everything.  The initial backup took a little while, but typically, it all takes one minute, or maybe two or three if I’ve loaded some large files.  I’ve got a daily reminder at 4 pm to plug it in.  The menubar icon for CCC turns black while the backup runs and when it turns white, I can unplug it and stick it back in my pocket.  All the mounting and dismounting is handled by the program. It’s so easy, I haven’t missed a day since I started it.

Here’s the CCC settings for the main backup: 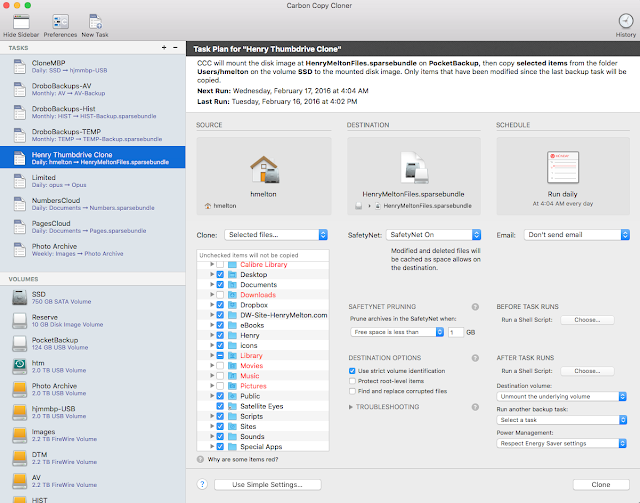 And here is the setup for the Pages backup.  Numbers is similar.

For the tiny space and minimal cost, it’s a nice peace of mind to have all my important files hiding down there in my pocket.