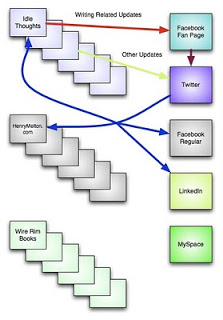 My web presence has grown over the years.  Back in the early ’90s I had the earliest site on the corporate network where I worked.  By the late ’90s I had moved added a personal site out on the wide web.  Take a look at this from the Way Back Machine, “The Melton Page”.

Part of what I did was a blog, even before that name was invented, and over time, I ported the personal blog thread to Idle Thoughts hosted on Blogger.

As it became clear to me that I needed an ‘Author’s site’, I branched off of my “Melton” site and created a place dedicated to my writing, where I could list my works and post some writings.  The first domain name I acquired was HenryMelton.com for this site.  From a hand-coded collection of pages, it gradually evolved to the iWeb managed site for people who are interested in my work.

When I began publishing and created Wire Rim Books, I first attempted to use the Google Pages to host a website as the public face of the company.  After struggling with the crude tools and templates available there, I created a second iWeb site at www.WireRimBooks.com where the focus was on the books published by the company.  It was a place for press releases, catalogs and collected reviews.

There were plenty of one-shot places as well, like Facebook, LinkedIn, and MySpace.  I would have to do a bit of research to track them all down.  Each time I added another, it was clear that keeping them all current was an impossible task.  The HenryMelton.com site and the WireRimBooks.com sites were heavily cross-linked to reduce duplication.  Browse around on one and you’re likely to end up on the other.  They can easily be thought of as one website.

When Twitter rolled around, it was clear that this was a happy way to add current information to many of the sites.  A little snippet of code could be included in each of the other sites and recent tweets would show up on appropriate sites.  When I added a Facebook ‘Fan’ page, there was the option to tweet whenever I posted something to the page.  Currently, Twitter is the core of the information flow among the sites, although I can start by tweeting directly, or by posting something writing related to the Facebook Fan page.  If it’s not writing related, I skip directly to Twitter.

The same applies to my Blog entries on Idle Thoughts (like this one).  If it is writing/publishing related, I’ll announce the blog post on the Facebook Fan page.  If it’s a blog about something else, like a snake in the swimming pool, I’ll announce it on Twitter.

It’s definitely a complex web of information, but that’s why it got that name, isn’t it?