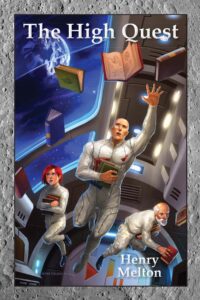 Centuries after the Plague, the only library on terraformed Luna had been destroyed in a horrific fire. Was the restoration of humanity’s greatness lost?

Charles Fasail, raised a scholar but orphaned by the Great Burn and enslaved as a dock worker in an illiterate culture, has now come into possession of the most powerful weapon on Luna and it seems like nearly everyone wants him dead. Facing the ugly truth that his dream of rebuilding his homeland might be a lost cause, Charles finds himself with great power and no goal to give his life meaning. Reaching out to one of his only friends, they realize that perhaps there still exists a library they could use to restore literacy to Luna, off in the abandoned L5 colonies in space. Charles has the only spaceship left on the forested world, the only way to reach those books, but that just might increase the number of people who wanted him and the ship destroyed!

The High Quest is the second book of the Lunar Alpine trilogy.

Henry Melton has been crafting the Project history line since the 70s, building an alternate history of mankind that stretches from the current day to a new destiny among the stars.