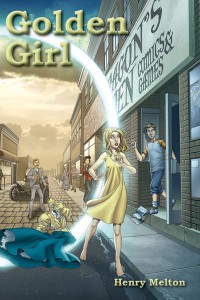 Debra Barr was barely awake when she found herself thrust into a pivotal role in the future of the human race. Hey, she wanted to be more than just a small town girl, but this was ridiculous! Plucked out of her bedroom in small town Oquawka, Illinois to a future Earth destroyed and poisoned by a major asteroid impact, future scientists explained how she could walk a few steps differently, and save the planet. But everything they told her was wrong. Instead of returning home, she appeared two hundred years in the past, and it was up to her to discover the rules of time travel without killing herself or anyone else in the process. Bouncing through time in her nightgown, one thing seemed certain, any choice she made meant life or death for everyone she knew. And the more she learned, the more she suspected that everyone was lying to her.

Small Towns, Big Ideas is a series that appeals to ages 12 and up. Starting in the here and now, these tales follow the trials of high school aged heroes that take that extra step into the fantastic when something unexpected drops into their lives. Many of the classic science fiction ideas like teleportation, alien contact and time travel are explored in a way totally accessible to many readers who “don’t read that kind of stuff” as well as being an exciting adventure for those who do.