Posted on January 9, 2015 by hmelton Posted in Books, Stories 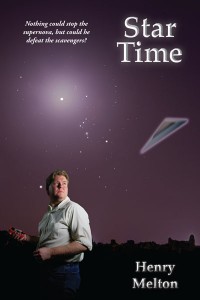 As a college student, I wrote a novel in long-hand, in three-ring binders.  There was a genius inventor who fought an aerial battle with aliens using his high-tech car to rescue the girl.  This was even before I could type, and it wasn’t all that good.  But that germ of a novel was re-written many times over the decades until it acquired real characters and a more in-depth plot. I don’t even think the names of the characters stayed the same.

During this long growth period I wrote many other stories, some of them appearing in science-fiction magazines, some of them languishing as early drafts in my file-cabinet — but a large number of them shared common history. As I started writing more novels, I also started crafting this very big story, one where individual novels were just chapters in the longer saga.

With this larger structure outlined, confident of the direction it would go, I began a re-write that became Star Time. The very real possibility of Betelgeuse going supernova (which I overheard being discussed by a couple of scientists at a convention) became the triggering event that splits this alternate history off from our real world. This was a bigger story than the adventure novels I had been writing.  The cast of characters ranged from astronomers in Australia, to a telepath in Wimberly, to a race of alien scavengers — but that genius inventor was still there, still willing to put it all on the line for the girl.

I had started a big playground for my ideas. I could craft an alien race that was very different from us — more than just people in rubber masks — and yet one that had its own history and logic. I could design and use a new kind of physics, with its own limits and rules. And I could write a computer intelligence character, based on research I’d read about with its own limits, but with its own potential that I’d never felt had been properly explored before.

And I knew, from the beginning that this was just day one of the bigger story.  Not all sub-plots had to be resolved in the page count of a single novel.  Now, I have an aversion to cliff-hangers.  I want each book to come to a satisfying ending, but I had more room to develop the ideas.

So, when it was completed, Star Time became my favorite.

Next up — My Favorite Book: Kingdom of the Hill Country